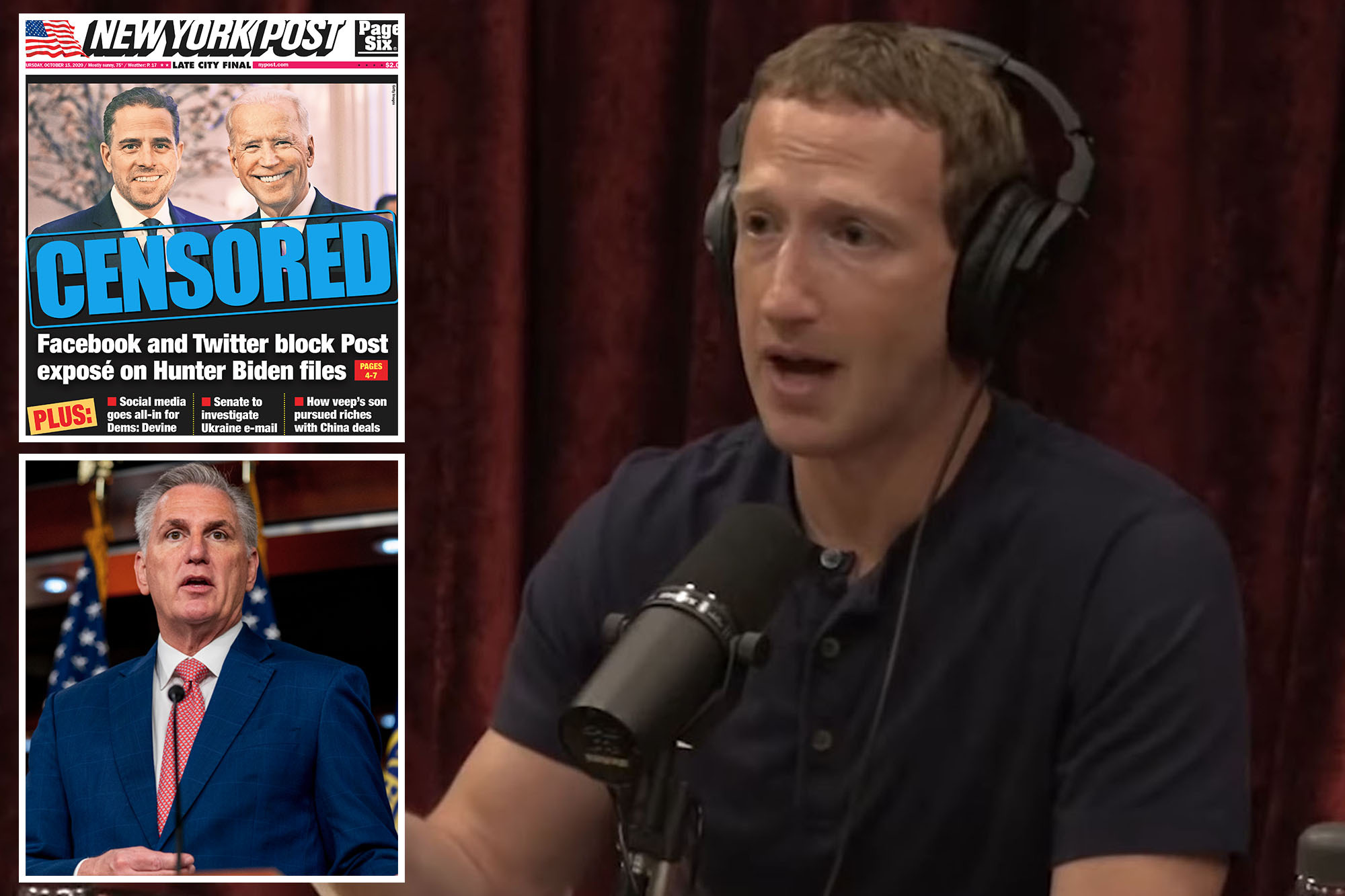 House Minority Leader Kevin McCarthy blasted the FBI and Big Tech as Orwellian Friday — after Facebook founder Mark Zuckerberg admitted that the social media platform was wrong to censor The Post’s bombshell reporting on Hunter Biden’s laptop ahead of the 2020 election.

“The FBI colluded with Big Tech to silence news stories weeks before the 2020 election in an attempt to control your access to information,” McCarthy tweeted late Thursday.

The California Republican then vowed to “hold all of them accountable.”

“Democrats in Congress have been intentionally ignoring the facts,” he seethed. “When Republicans are back in charge, we will hold all of them accountable.”

During Thursday’s bombshell interview on “The Joe Rogan Experience,” the CEO of Facebook revealed that the social media platform censored the report about Hunter’s laptop for up to 7 days after being contacted by the FBI to be on the lookout for election misinformation.

“The FBI basically came to us… (saying), ‘Hey, you should be on high alert. We thought that there was a lot of Russian propaganda in the 2016 election. We have it on a notice that there is about to be some kind of a dump that is similar to that, so be just vigilant,’” the billionaire tech mogul recounted the feds’ explanation.

Zuckerberg noted that he could not recall that the FBI raised a red flag about the laptop story specifically, but said “basically it fit the pattern.”

However, Zuckerberg said that unlike Twitter, which he said barred its users from sharing the story about Hunter’s laptop outright, Facebook took a less “black and white” approach.

He said that instead of preventing Facebook’s users from consuming and sharing The Post’s story, the company engaged third-party fact-checkers because “we don’t want to be deciding what’s true or false,” he said.

“I think it was 5 or 7 days, when it was basically being determined whether it was false, that the distribution on Facebook was decreased, but people were still allowed to share it,” Zuckerberg added.

When asked to clarify the protocol, Zuckerberg said: “the ranking in the Newsfeed was a little bit less.” He said he could not quantify the decrease in percentage points, but admitted that it was “meaningful.”

Zuckerberg conceded that he regretted suppressing the factually accurate story — but still defended his company’s protocol as “fairly reasonable.”

“Yeah, it sucks,” he said. “It turned out after the fact, the fact-checkers looked into it, no one was able to say it was false … I think it sucks, though, in the same way that probably having to go through a criminal trial but being proven innocent in the end sucks.”

Rogan suggested that social media platforms did not assess the news story carefully enough before deciding to censure it.

“When the New York Post is talking about it, they’re pretty smart about what they release and what they don’t release,” the podcaster said.

Zuckerberg noted that despite the slowdown in the story’s distribution, the platform’s “reasonable” approach allowed users to still share it, causing a flood of complaints.

“This is a hyper-political issue, so depending on what side of the political spectrum, you either think we didn’t censor enough or censored it way too much, but we weren’t as black and white about it as Twitter,” he added.

Twitter briefly suspended The Post’s account in 2020 after the laptop exposé revealed the existence of tens of thousands of emails between the president’s son and business associates. The emails revealed how Hunter Biden leveraged his high-level political access in his overseas business dealings.

Writing in an op-ed for The Post last month, McCarthy vowed to get to the bottom of what he called the Biden family’s “shady business dealings.”

The high-ranking GOP congressman accused “legacy media” and Big Tech for either ignoring — or actively suppressing — The Post’s exposé about Hunter Biden.

“One of the nation’s largest newspapers was effectively shut out of the digital public square,” McCarthy said.

The lawmaker also took a swipe at the 51 former intelligence officers who circulated an open letter questioning the reporting’s veracity and arguing that it had all the hallmarks of a Russian disinformation campaign.

“These signatories misused the imprimatur of their former titles to discredit evidence that raised serious questions about the access granted to Joe Biden during his last time in office,” McCarthy argued.

The Republican claimed that despite Democrats’ refusal to cooperate with a GOP-led congressional investigation into the Biden family’s business dealings, the probe has uncovered that the president’s family members “used their connections with Joe to enrich themselves through expectations of access and promises about what a Biden administration might do.”

McCarthy concluded his essay by urging Americans to vote Republican in November.

“A Republican majority will be committed to uncovering the facts the Democrats, Big Tech and the legacy media have suppressed,” he vowed.